The notion that the EU was uncompromising was as absurd as the claim that Brussels had buckled. Brexit has entered a negotiating phase. We need to understand negotiations and to spot the flexibility in the noise 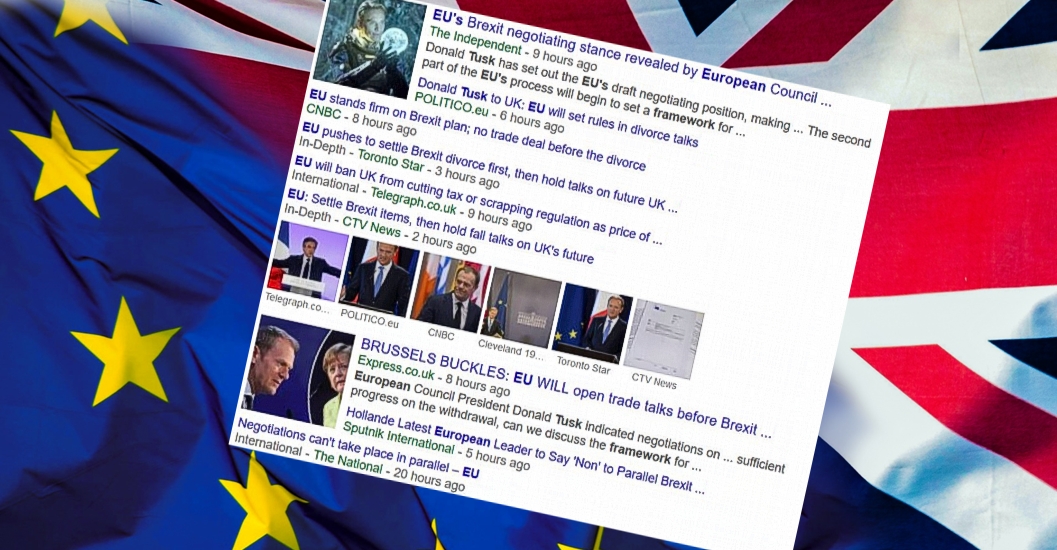 Perhaps we should not be surprised, but should we be concerned? After Donald Tusk presented the EU–27’s draft negotiating guidelines for Brexit on March 31, 2017, the headlines showed widely different interpretations.

They ranged from fact and conciliation to confrontation and capitulation, all based on the same document:

As real negotiations are now set to begin, we need better than that. In several cases the actual stories did reflect the nuances, but those headlines set the tone. By and large, Tusk’s text was seen to rebuff May’s March 29 letter kicking off Article 50.

This is what happened over the three days.

“The United Kingdom wants to agree with the European Union a deep and special partnership that takes in both economic and security cooperation. To achieve this, we believe it is necessary to agree the terms of our future partnership alongside those of our withdrawal from the EU” (my emphasis)

May was calling for simultaneous, parallel talks: on the divorce terms and on the future relationship, including trade and security.

“The negotiations must first clarify how we will disentangle our interlinked relationship … and only when this question is dealt with, can we — hopefully soon after — begin talking about our future relationship.”

The headlines were unequivocal. Merkel had scuppered May’s plans:

Some voices disagreed with that interpretation, but they were largely unheard.

Then on March 31, 2017, Tusk presented his draft guidelines (pdf), which includes this:

“4. While an agreement on a future relationship between the Union and the United Kingdom as such can only be concluded once the United Kingdom has become a third country [non-EU member], Article 50 TEU [Treaty of the European Union] requires to take account of the framework for its future relationship with the Union in the arrangements for withdrawal. To this end, an overall understanding on the framework for the future relationship could be identified during a second phase of the negotiations under Article 50. The Union and its Member States stand ready to engage in preliminary and preparatory discussions to this end in the context of negotiations under Article 50 TEU, as soon as sufficient progress has been made in the first phase towards reaching a satisfactory agreement on the arrangements for an orderly withdrawal” (my emphasis)

Tusk is actually saying parallel talks are required by Article 50, because it demands a framework for future relations.

The only question is when the second track of the parallel talks should start. Tusk had an answer to that too — in the autumn.

“Once and only once we have achieved sufficient progress on the withdrawal, can we discuss the framework for our future relationship … probably in the autumn, at least I hope so,” AP and others quoted him saying. That’s still early in the 2-year Article 50 process.

Certainly by comparison with the headlines over Merkel’s statement, Tusk sounds much more flexible. The UK and EU would clarify the terms of separation (even if they are not settled yet) such as an acceptable range of separation costs, and proceed to parallel talks.

Then, take another look at what Merkel said. It’s more or less the same as Tusk and the guidelines.

“… The door is wide open for parallel negotiations, albeit not from the very beginning. … The draft guidelines make it clear that parallel negotiations will be fully possible during the two-year timeframe stipulated by Article 50 — provided that ‘sufficient progress’ on the terms of the withdrawal is achieved.”

The notion that the EU was uncompromising was as absurd as the claim that Brussels had buckled.

Some have claimed that this is still confrontational because it’s the EU Council that will decide when “sufficient progress” has been made. Therefore the EU is calling the shots and the UK will have no say, they argue.

But this is a negotiation. And that means “sufficient progress” is also negotiable. On some issues the EU will hold stronger cards, probably including this, but that doesn’t mean the EU’s position is fixed. Negotiations can only work if both sides want a result and they show flexibility. There will have to be give and take by both.

Which brings us back to the original problem. Many of the headlines show a failure to understand negotiations. The gut reaction is always to pinpoint where the two sides disagree. Often that is valid. But it also means missing the crucial openings when they are made.

The Article 50 talks could have been deadlocked over extreme positions: “parallel talks” versus “one before the other”.

Now there is room to discuss when the second track should begin. If the UK and EU–27 cannot sort that out, there’s no hope for the far more complicated stuff.

That said, there is a potential collision course. Not the parallel talks question, but the requirement that Spain should agree on any arrangement involving Gibraltar.

Understanding negotiations also means being prepared for unwelcome surprises. The Gibraltar issue came out of the blue and complicates the UK-EU talks. It may lead to procedural delays even — as some suggest — if the talks’ final outcome is unaffected because of EU voting rules.

It could even get worse. There could be a tussle over fisheries policy.

Or, completely hypothetically, we could imagine a situation where the best sweetener the UK can offer Spain is a free trade agreement with the EU and a commitment to copy and paste the EU’s tariffs on oranges, which currently protect Spain and other Mediterranean producers.

The price for the UK and its consumers would be the missed opportunity to import cheaper, lower-duty oranges from South Africa, Brazil and the US, and additional complications in negotiating free trade agreements with them.

Much will also depend on what influence the 26 other EU members have over Spain and how pragmatic Spain wants to be. If the UK, EU and Spain are not careful, a few words in the Tusk text could escalate into serious complications across a wide range of talks.